One of three greatest Monasteries in Tibet

Sera monastery is located at the base of Mount Purbuchok, which forms part of the watershed between the Kyi-chu and the Penpo-chu rivers. It’s only 5km from Lhasa City. It was founded in 1419 by Tsongkhapa’s disciple Jamchen Choje Sakya Yeshe of Tsel Gungtang (1355-1435).

Prior to this foundation, Tsongkhapa and his foremost students had established hermitages in the ridge above (Sera Utse). In time, the monastic community at Sera came to a number between 5,000 and6,000 monks.

The complex comprises the Great Assembly Hall (Tsokchen), three colleges (previously there were four or five, including Sera To which were gradually amalgamated), and 30 residential units (khangtsang).

A long driveway divides the complex into eastern and western sectors – the former containing the Great Assembly Hall and the Homdong Kangtsang, and the latter containing the three colleges.

The Sera Mye college, constructed in 1419, covers a large area (1,600 square meters) and has 13 residential units (khangtsang). It is the college promoting elementary studies at Sera. Its assembly hall was destroyed by lightning and rebuilt in 1761 by Kunkhyen Jangchub Penpa. It now has eight tall and 62 short columns, with main images of Shakyamuni (in copper) flanked by Maitreya, Manjushri, and Amitayus, as well as by Bhaisajyaguru, Tsongkhapa, and his students, Dalai Lama VII, Pawangka Rinpoche, and various former monastic preceptors of Sera Mye.

There are five inner chapels attached to the assembly hall. Here described from west to east (from left to right): Tawok Lhakhang contains an image of Tawok, protector of the east; Je Rinpoche Lhakhang, contains a stupa with an inset image of Tsongkhapa flanked by images of Tsongkhapa and Shakyamuni; Neten Lhakhang contains images of the Buddhas of the Three Times flanked by the Sixteen Elders in their mountain grottoes and volumes of the Prajnaparamita.

Jokhang once contained the celebrated image of Miwang Jowo Shakyamuni, which has now been replaced with a large new Buddha image, flanked by the Eight Bodhisattvas, and guarded at the gates by Hayagriva and Acala; and lastly, Tsongkha Lhakhang contains an image of Je Rinpoche flanked by Atisha, Dromtonpa, Dalai Lamas I-III, Dalai Lama V, Jamchen Shakya Yeshe, Gyeltsen Zangpo, who was the first preceptor of Sera, and Kunkhyen Jangchub Penpa, the founder of the college, and so forth.

The second floor contains the Nyima Lhakhang which has a central image of Shakyamuni Buddha in the form of Tuwang Tsultrim, and the Kangyur Lhakhang now contains 1,000 small images of Tara since its volumes were destroyed during the Cultural Revolution. The third floor has the Dalai Lamas’ private apartments. 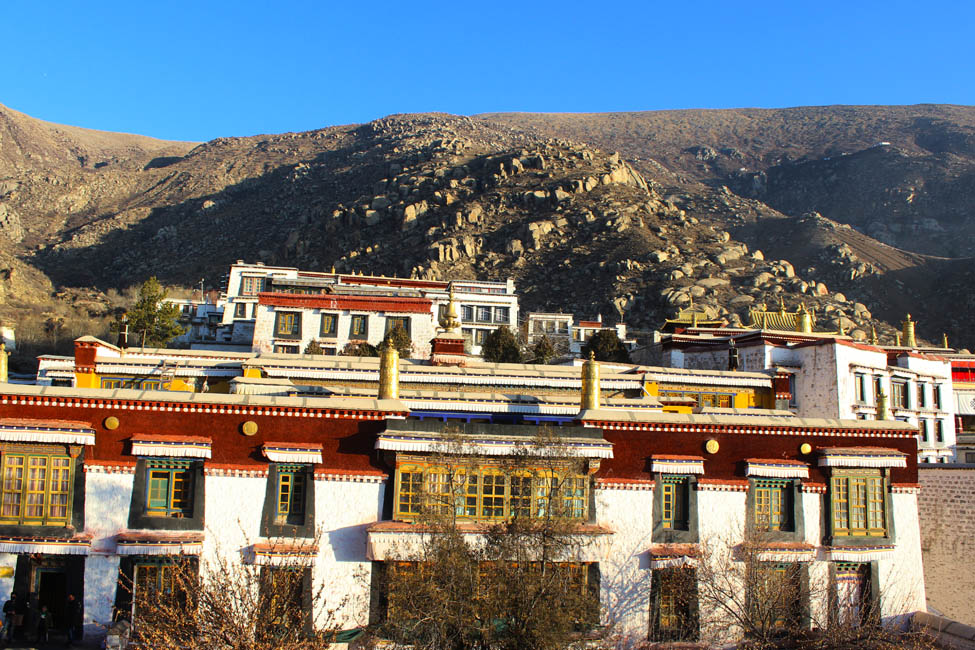 This three-storeyed college building was built in 1412 by Lamchen Choje, Shakya Yeshe and refurbished by Lhazang Chen in the early 18th century. It is the smallest of the current three colleges at Sera, focussing, as its names uggest, on tantric studies. The ground floor contains the assembly hall and two inner chapels.

The assembly hall has 42 short and four tall columns with elaborately carved capitals. The central image is an original Jamchen Choje Shakya Yeshe wearing a black hat, which was probably presented to Sera by Emperor Yongle (1360-1424) of the Ming Dynasty. Flanking this image are: Maitreya, Gyeltsen Zangpo, who was the first preceptor of Sera, Pawangka Rinpoche, Tsongkhapa with his foremost students, Dalai Lama XIII, Chokyi Gyeltsen, and Sera Je’s founder Lodro Rinchen.

As for the two chapels: Neten Lhakhang contains images of Shakyamuni Buddha flanked by two sets of the Sixteen Elders, the upper series in Tibetan style and the lower series in Chinese lacquer, which was presented by Emperor Yongle to Jamchen Choje Shakya Yeshe. Jigje Lhakhang contains an original 15th-century image of Bhairava, flanked by Mahakala, Dharmaraja, Shridevi, and so forth.

The second floor of the building has the Tsepame Lhakhang where the central image of Amitayus is flanked by the reliquary stupas of Gyeltsen Zangpo and Jetsun Chokyi Gyeltsen, as well as by images of the Eight MedicineBuddhas.

The third floor has the Dalai Lamas’ private apartments. 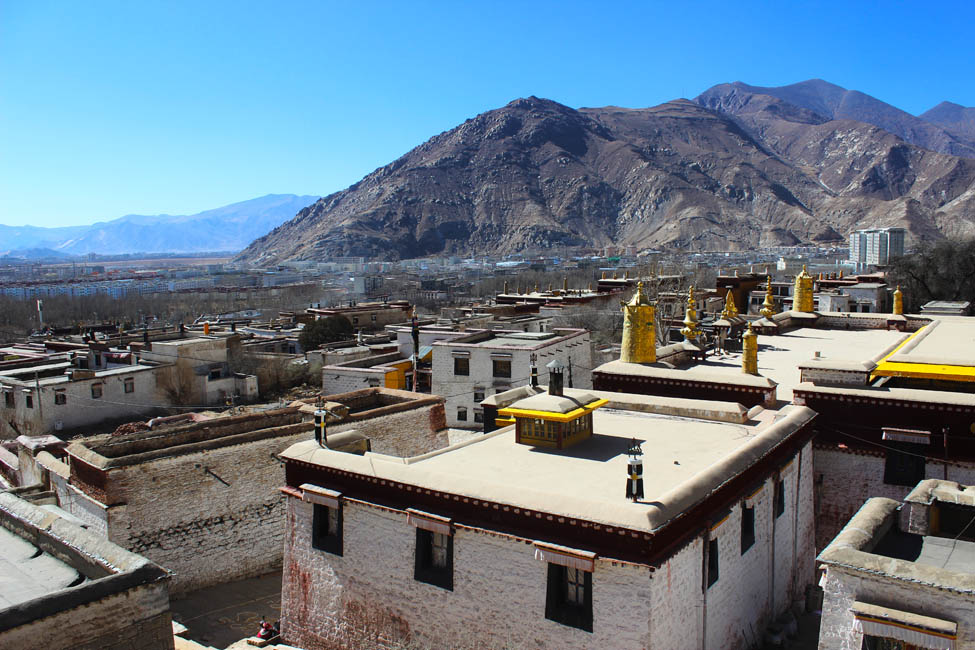 Sera Je is the largest of the three colleges at Sera, covering an area of 1,700 square meters, with 17 residential units (khangtsang) which housed mostly immigrant monks from east Tibet and Mongolia. It was founded by Gungyel Lodro Rinchen Senge, a student of Tsongkhapa and Jamchen Choje Shakya Yeshe. The building originally had three stories, the fourth being added during a period of expansion in the 18th century when the number of columns in the assembly hall was increased to 100. The finely decorated assembly hall has murals depicting the deeds of the Buddha, the thrones of the Dalai Lamas and Panchen Lamas, and, on its north wall a series of reliquary stupas, and images of Dalai Lamas Vill and Xlll, Reting Tulkus Il, and IX, and sera Je’s founder, Lodro Rinchen.

The following chapels are visited sequentially on the west and north sides of the assembly hall: Dusum Sangye Lhakhang contains images of the Buddhas of the Three Times and the Bight Bodhisattvas. Tamdrin Lhakhang contains the most sacred image of Sera Monastery, Hayagriva, sculpted by Lodro Rinchen himself, and enclosed within a gilded copper embossed shrine.

The upper left compartment of the shrine contains the Sera Phur Zhal dagger, which is traditionally placed on public view only on the 17th day of the 12th a lunar month once the Dalai Lama has touched it. The dagger reportedly flew from India to Mount Phurbuchok near Sera and was hidden as a treasure (terma) at Yerpa before being unearthed by the treasure-finder (terton) Darcharuba. The chapel is also bedecked with military regalia befitting a protector shrine room. Jampa Lhakhang contains images of Maitreya, Eleven-faced Mahakarunika, and Tsongkhapa with his foremost students, all surrounded by an impressive library. The Tsongkhapa Lhakhang contains images of Tsongkhapa with his foremost students and important lamas of

Sera Je as well as Nagarjuna and the other great Buddhist commentators of ancient India, and the gatekeepers Hayagriva and Acala. Manjushri Lhakhang (northeast) contains two Manjushri images and one Maitreya image, the central Manjushri in the teaching gesture (Dharma Cakramudra) looking out onto the debating courtyard.

On the second floor, the Zhelre Lhakhang (west) permits a view of the sacred Hayagriva image on the floor below, but also contains a small image of Nine-headed Hayagriva, flanked by Padmasambhava, Dalai Lama V, and the protector deities. On the third floor, there is the Namgyel Lhakhang; and on the fourth, the private apartments of the Dalai Lamas and the preceptors of Sera Je. 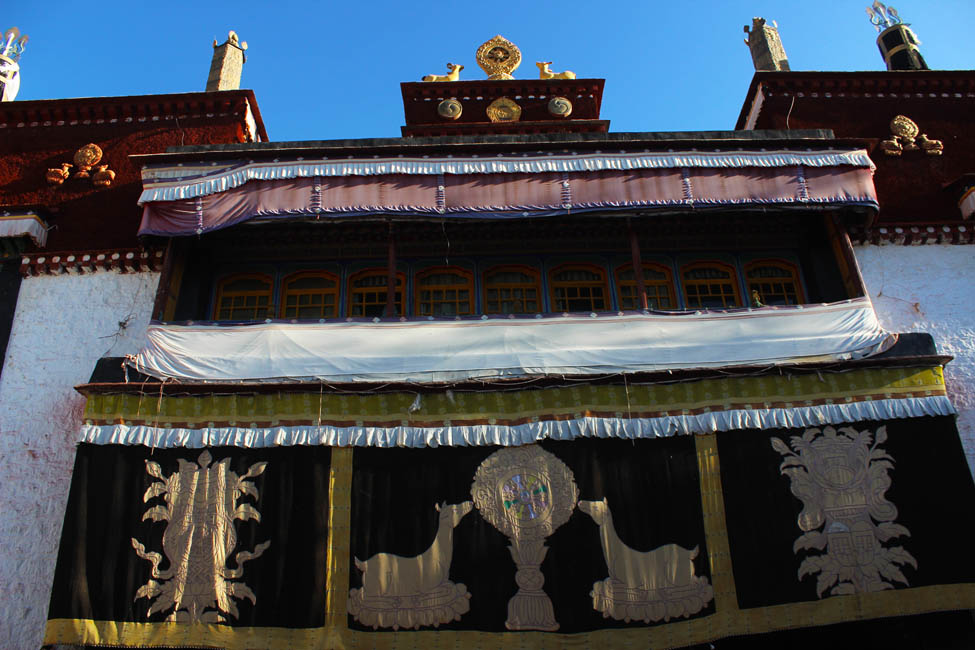 The famous Debating Courtyard (Chora) contains a stone into which 13 syllables A are said to have dissolved once Tsongkhapa had completed his commentary on Madhyamaka philosophy, written in the hermitage above 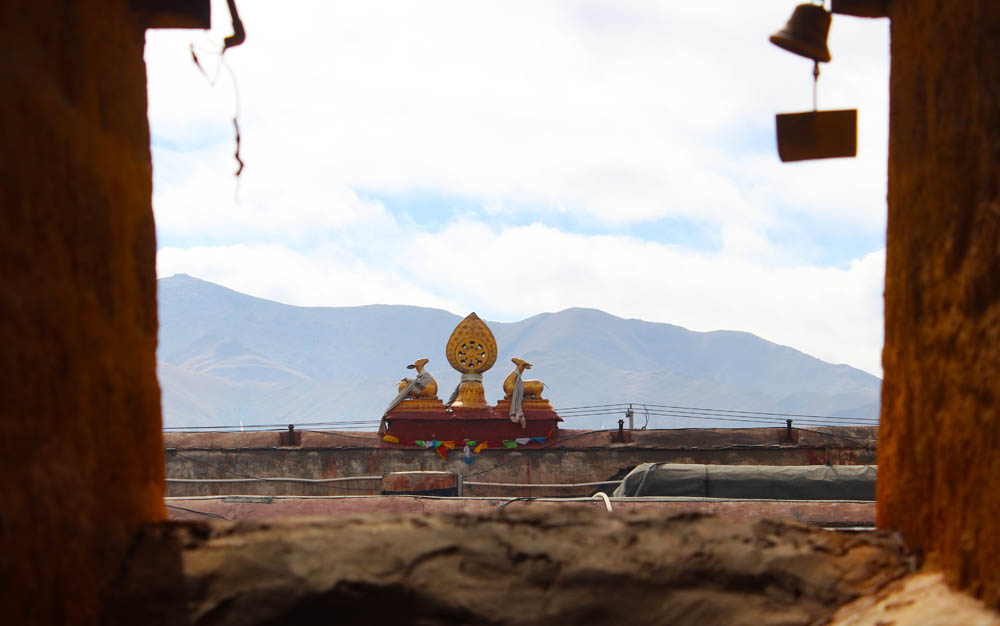