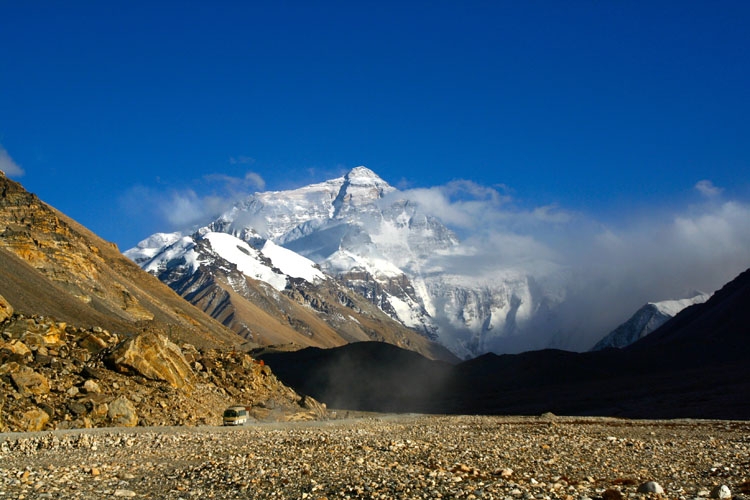 Known as Tingri, Old Tingri, Dingri, Ganggazhen, and even Gangkar Town, Tingri is a small town in Tingri Country of Shigatse Prefecture in Tibet Autonomous Region. The seat of Tingri Country for eight years, the county government was moved to Shegar Town in 1968, and Tingri is often known now as Old Tingri.

Lying along the G318 National Road, better known as the Sino-Nepal Friendship Highway, Tingri is a small, gritty town around a kilometer long, laid out along the sides of the road. Mostly made up of guest houses, restaurants, and repair workshops, this gateway to the Everest Region is rarely visited for its own merits. It is more for the closeness to Mount Everest National Park and the Tingri Plain, popular places for trekking and climbing. Lying at an altitude of around 4,300 meters, the most enchanting thing about the town is the ancient Shekar Dorje Dzong that lies above the town.

The Dzong houses the Shekar Chode Monastery, which was destroyed and is still in restoration. Tingri is also notable for the excellent views of four of the highest mountains in the world, Mount Everest, Mount Lhotse,  Mount Cho Oyu, and Mount Makalu. 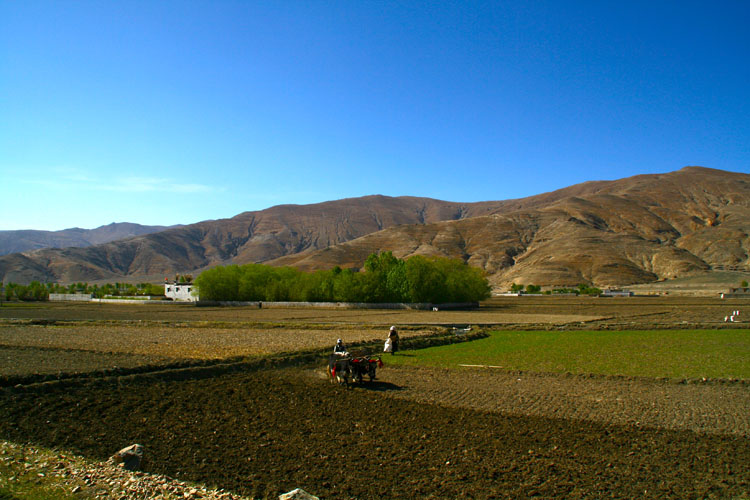 Historically, Tingri was an important trading town for the local people, who would trade Tibetan wool, salt, and livestock for grain, rice, and iron from the Nepali Sherpas. To the north lies the upland basin is known as the Tingri Plain, which was one of the best pasturelands in the area, at more than 4,500 meters above sea level. Fed by shallow, fast-flowing snowmelt rivers that make it lush grassland, it is ideal for grazing animals and has long been the home to many nomadic herders. Once covered in gazelles, blue sheep, and antelopes, the plains were a major source of meat in the past, though many of the animals were hunted almost to extinction.

In 1097, Tingri Lankor, or Ding Ri Glang ‘Khor, was founded by the Indian Buddhist adept, Padampa Sangye, and has come to be known as “Padampa’s Residence”. Padampa was an important monk in the restoration and re-establishment of Buddhism in Tibet and made many visits to Tingri over the years of his life.

Legend says that the Buddha through a dark stone, known as the “Ding-rdo rMug-po” from the top of a mountain in India, and instructed his disciple, Padampa, to find the stone and build a temple on the spot where it lands. From the top of his mountain, the Buddha heard the stone make a glorious sound as it landed, the “DING” sound reverberating through the region. When Padampa arrived at the spot in Tibet where it landed, which the Buddha had told him would be called Ding-Ri, he found the stone surrounded by seven deer, that proceeded to merge into one another, and then when only one was left, it merged into the stone. Fulfilling his master’s prophecy, Padampa stayed in Ding-Ri, accomplishing many practices in the first three years, until people came to know who he was.

On his first visits, he would reside in a meditation cave nearby, with his consort, the Tibetan Dakini Machik Labdron, and a gompa was later built on the site around the caves. The gompa later became the seat of the Dampapa School of Tibetan Buddhism and is currently in the process of being restored to its former glory. 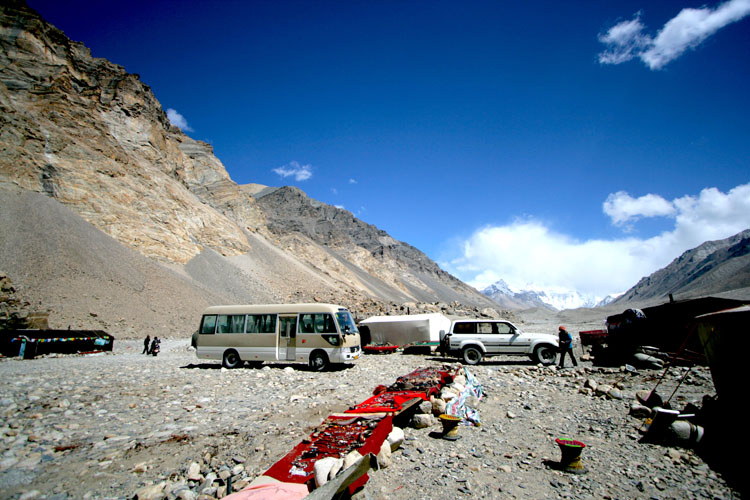 How to get to Tingri Town

Getting to Tingri requires a drive of several days to the west of Lhasa, along the G318 National Road, known as the Sino-Nepal Friendship Highway.  Listed on most maps in its Chinese name, Ganggazhen, Tingri lies over 560 kilometers from Lhasa, the Tibetan capital, and around 60 kilometers from the Nepal border.

Often referred to as the Gateway to Everest, Tingri is the point at which vehicles with parties heading for the northern Everest Base Camp (EBC) turn south along the S207 road to EBC itself. 72 kilometers from EBC, Tingri is the last decent-sized town one can find before getting to Everest and is well known locally for providing supplies to those camping in the base camp.

From Nepal, The easiest route to Tingri, to get to EBC, is to take the road from Kathmandu to Rasuwagadhi Fort, on the border with Tibet, and cross the Resuo Bridge to Gyirong Port, the immigration control center for foreign visitors to Tibet. From there, the road goes first to Jilongzhen, in the Gyirong Zangbo River Valley, from where you head north to Gyirong Town, and then turn east along the S214, past Paiku Co Lake to Nyalam, where you join the G318 to get to Tingri. A total of over 260 kilometers from the border, it takes around two days to travel to Tingri from Kathmandu, and many travelers stop for the night in Gyirong Town. 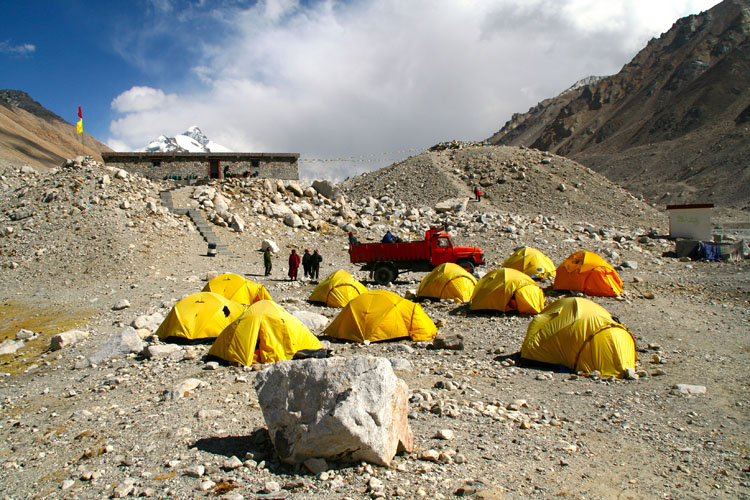 Because of its extreme altitude, the weather temperature in the area around Everest can be very different from that of other areas, even those nearby. This makes the best time to visit Tingri dependent on the weather at EBC. Spring and autumn are usually the best times to visit the area to get a good view of Everest’s high peak.

From April to early June and from September to the end of October, the weather in the area is at its best for viewing the high mountains around Tingri County, and the skies are clear while the temperature is mild to warm, although a little cold at night. Summer can also be a good time to visit the area, although there is a high chance that the peaks of many of the mountains would be covered by clouds. Winter in the region can be a little harsh, and while there are clear skies quite often, there is a high chance of snow from January to March, making travel to the area harder. 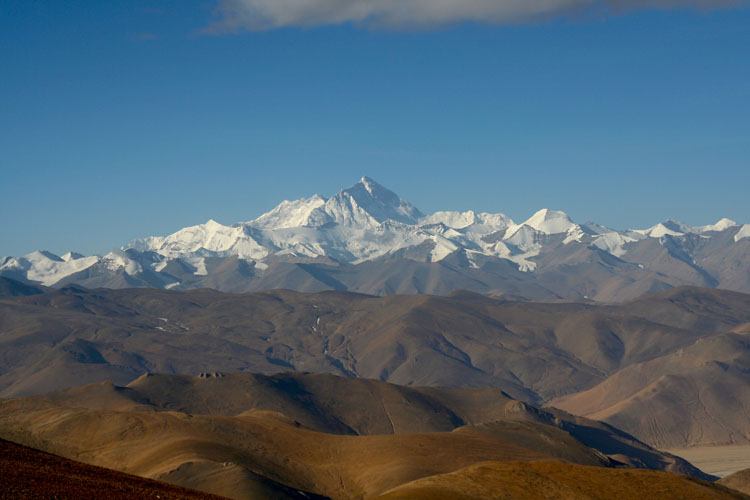