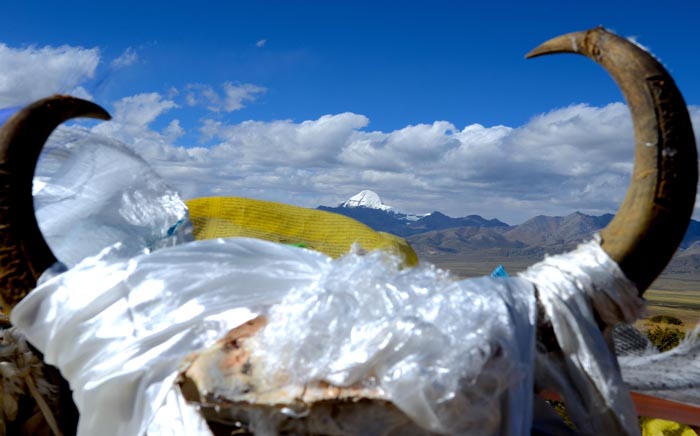 If you look at Darchen on Google maps satellite view, it appears to be little more than a collection of buildings in a small village in western Tibet. However, this small village is one of the most important places for both Buddhist and Hindu pilgrims, as it lies at the gateway to the holiest site in the world for both religions.

Sitting at the side of the G219 National Road in Burang County of Ngari Prefecture of Western Tibet, Darchen is the place all pilgrims pass through on their way to the sacred Mount Kailash, also known in Tibet as Gang Rinpoche, Kangrinboqê, or Mount Kailasa. This holy mountain, which is said to be the home of the gods for four separate religions, is the most sacred and spiritual natural site in Tibet and is visited by hundreds of thousands of pilgrims and tourists every year.

The signpost for the village on the G219, where the small dirt road forks off to the north, still says “Lara,” the ancient name for the village, and it played an important role for the nomads and sheepherders of the region. Only one of the two original buildings remains in the village, which is now used as a hostel for pilgrims to Mount Kailash.

The village lies directly in front of the holy mountain, whose peak towers 6,638 meters, and it is the starting point for tourist tours and pilgrimage journeys around the mountain. The village is not big and contains a few guesthouses, some small restaurants, a few stores and kiosks selling goods and food, and the Gandise Hotel, where all pilgrims heading for the Kailash kora purchase their “tickets,” and where the PSB officers are stationed from April to October.

Interestingly, while it is hundreds of kilometers from the Bhutanese border, Darchen was once an exclave of that kingdom, a small territory of the Land of the Thunder Dragon in Tibet, which they held for more than 300 years until 1959. 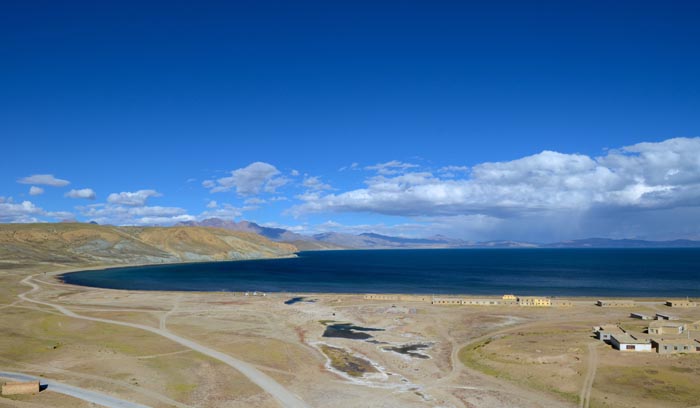 For those visiting Darchen, there are few sights to see inside the village, but once you get outside, there is more than enough to keep any ardent tourist busy for months, let alone a short week. To the north of the village is the holy Mount Kailash, a sacred mountain for Hindus, Buddhists, Jains, and Bonpo, which is believed to be the center of the universe in all four religions. In Tibetan, Gang Rinpoche means “precious jewel of snows,” while the Sanskrit name, Kailasa, means “crystal.” The Bon have many names for the mountain, including Water’s Flower, Mountain of Sea Water, and Nine Stacked Swastika Mountain.

The mountain has many myths surrounding it, but the most prominent one in Buddhism is the legend of the battle between Milarepa and Naro Bon-Chung. The two legendary magicians battled for the mountain, but neither could gain an advantage until We agreed that whoever reached the summit first would be victorious. While Naro Bon-Chung rode a drum up the mountainside, Milarepa sat meditating, but as the Bon magician neared the top, Milarepa rode the sunlight up to the mountain and won the challenge. The nearby mountain, Bonri, was bequeathed by Milarepa to the Bonpo people to ensure they connected with the region.

For the Buddhists, it is believed to be the home of the Buddha Demchok and is known as Mount Meru in many Buddhist texts and scriptures. The Jains also believe it to be the holy site of Mount Meru, and according to Jain writings, the mountain next to Kailash, Mount Ashtapada, was the site where the first Jain attained liberation. For the Hindus, the mountain is the home of the god Shiva and his wife Parvati, who sit in a state of perpetual meditation on the mountain’s summit. In the Bon religion, the original animist religion of Tibet, the mountain and the surrounding area is the axis Mundi or the center of the universe. It is known in the Bon texts as Tagzig Olmo Lung Ring.

Every year, thousands of pilgrims come to the mountain to walk the famous kora route around it, some taking the normal three days to complete it, while others race around the kora in just one day. Still, others take several weeks to circumambulate the mountain, repeatedly prostrating themselves on the ground as they go. 52 kilometers long, the kora route is arduous and rises to the point of over 5,000 meters at its highest pass.

To the south of the mountain lie two lakes, twin lakes of a completely different type. Lake Manasarovar, one of the Three Great Sacred lakes of Tibet, is a freshwater lake fed by the glacial melt from Mount Kailash, which is also a holy site for the four religions. To the west of Lake Manasarovar lies its twin, Lake Rakshastal, a saltwater lake that is the source of the Sutlej River and has little religious significance.

Manasarovar is believed by the Hindus to have been created by Lord Brahma from his mind and is the personification of purity on earth. It is believed that if one drinks the waters or bathes in the lake, it will cleanse all the sins of a lifetime, and he will go to the abode of Shiva after death. A lake is a popular place of pilgrimage for the Hindu people, and regular pilgrimage tours from India are organized to the lake and mountain, famously known as the Kailash Manasarovar Yatra.

The lake is associated with the legendary place where Maya was believed to have conceived Buddha for Buddhists. There are several monasteries around the lakeshore, and the ancient Chiu Monastery stands on a steep hill next to the lake as if it had been carved out of the very rock itself. 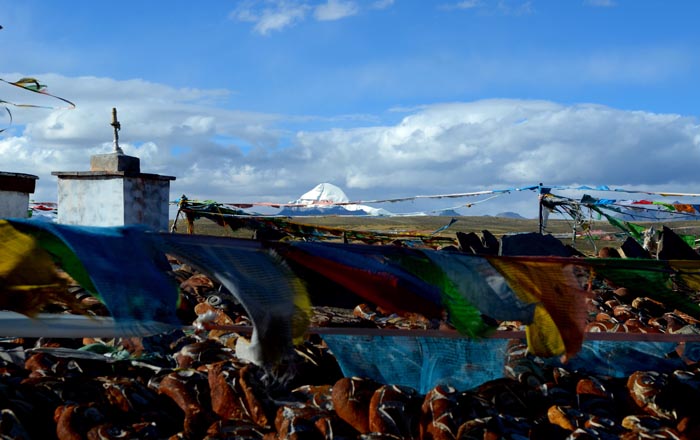 How to get to Darchen

Getting to Kailash and Manasarovar can be done from Lhasa, along the G318 and G219, and is a journey of around three days. Often part of a tour to Tibet, the journey to the mountain and lake often includes three days set aside to walk the kora route. From Nepal, the region is also easily accessible, from the border crossing at Gyirong Port, from where you can drive to the lake using part of the same route as from Lhasa, or you can cross the border at Hilsa into Burang County direct, though this route is normally only open to organized pilgrim tours from India. 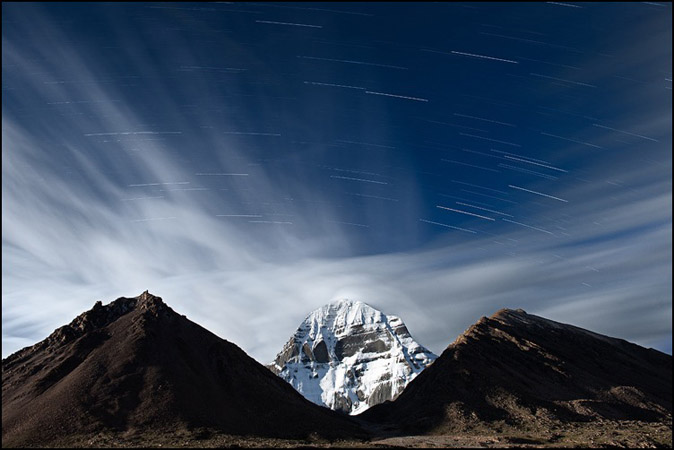 Mount Kailash and Lake Manasarovar are best visited from April to the end of November, with the peak times being during spring and autumn. The weather in the spring and fall is better for the long, arduous trek around the mountain as it is not too hot, yet still warm enough to enjoy a dip in the springs that can be found near the exit from the valley to the east of the mountain.

Summer is still a good time to visit, though there can often be cloud cover over the peak, which makes for poor viewing conditions. Winter, however, is not recommended, as the snows in the area can get heavy, and the mountain can sometimes be cut off due to bad weather. 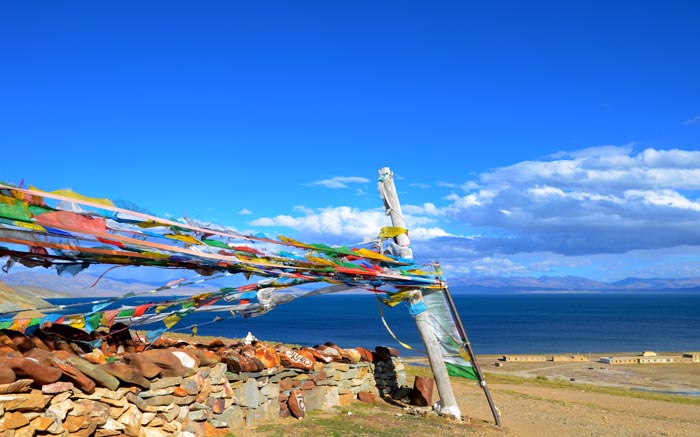