Home for the state oracle Nechung

Located one kilometer southeast of Drepung, Nechung Monastery is the abode of the protector deity Pehar and the seat of the State Oracle of Tibet, Pehar is said to have had legendary associations with Zahor and later, under the name Shingjachen, with the Bhatahor Kingdom of Central Asia.

Following the subjugation of that kingdom by the Tibetan army under Prince Muru Tsepo, Padmasambhava converted Pear’s five forms to Buddhism, renaming them Gyelpo Ku-Nga. The first Tibetan abode of Pehar was at pearling in Samye. Later a second abode was established at Tsel Gungtang but the image of Pehar in that locale caused havoc, prompting Lama Shang to expel it in a casket into the Kyi-chu River. Retrieved from the river at Drepung, the Pehar image escaped from the casket in the form of a dove that flew into the tree at Nechung. This tree is nowadays in the rear left-side chapel, along with an image of Pehar and a photo of the Nechung Oracle. 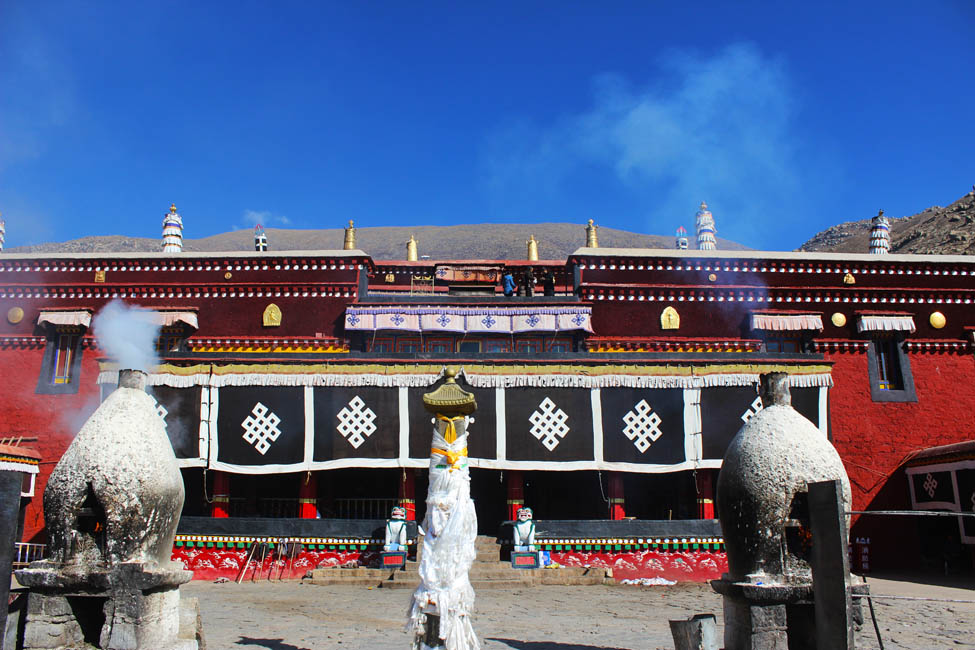 The first temple at Nechung was constructed in the 12th century; and Pear since then is said to have periodically left the tree to foretell the future through his medium Dorje Drakden who would possess the Nechung Oracle, making pronouncements on natural disasters, political appointments, and so forth.

Originally a Nyingmapa establishment, Nechung later developed a close relation with nearby Drepung Monastery; and from the time of Dalai Lama V, its oracles have held highly influential positions within the political life of Tibet, acting frequently as an intermediary between Pehar and the Dalai Lama.

Each Great Prayer Festival at Lhasa, the oracle would leave Nechung for Meru Monastery via the Barkhor and appear publicly on the 24th day of the first month of the lunar year to ward off obstacles. Above all, the oracle was required to undertake rigorous training in tantric liturgies. When possessed by Dorje Drakden, the oracle would whisper his pronouncements, which would then be interpreted and written down by monk attendants on long blackboards dusted with limestone powder. 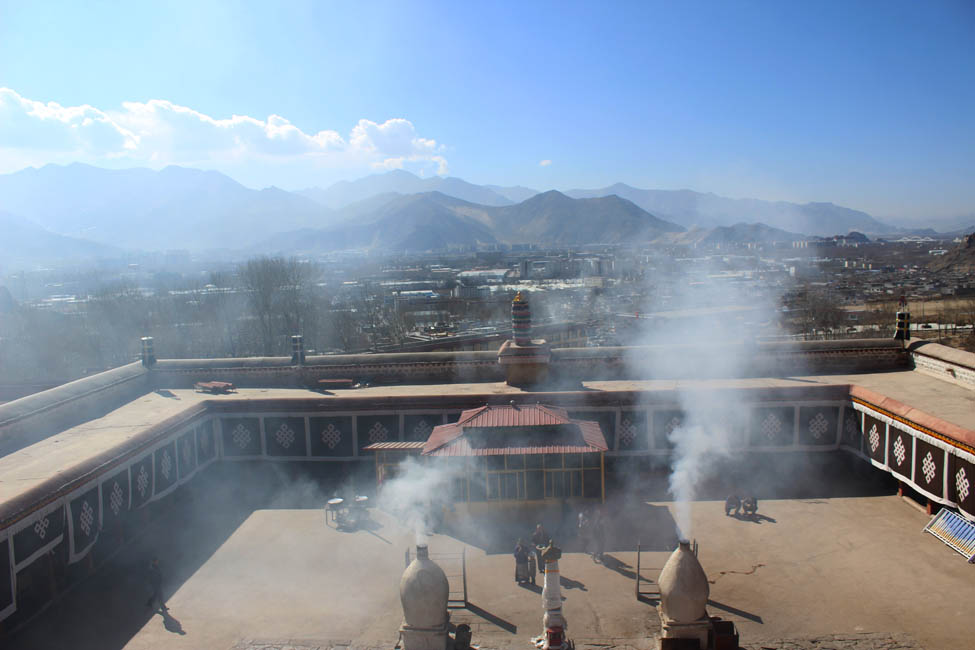 The oracle was also generally accessible to the nobility who paid generously for private divinations. In 1904, the medium was obliged to abdicate by Dalai Lama XIII owing to false prognostications concerning Younghusband Expedition.

In 1930 a new medium emerged to confirm the recognition of the new Dalai Lama XIV 1937. He gave the advice during the 1950s concerning the movement of the Dalai Lama and his Geshe examinations of 1958. The following year, he fled to India with his entourage of six monks.

The buildings of Nechung mostly survived the Cultural Revolution apart from its gilded roofs and embellishments. The complex, nestling within a grove of juniper and fruit trees, is approached via a lane marked by a water tower, southeast of Drepung. The residence of the Nechung Oracle is located behind the main buildings, while the School of Buddhist Dialectics (Nangten Lobdra) is located down a lane to the left of the main entrance.

The courtyard is entered by three gates, of which the southern one is always closed, reputedly because Dorje Shugden is said to be waiting constantly outside this gate to usurp power on the departure of Pehar. Murals here depict Pear and retinue, and there is an inscriptionless obelisk dedicated to Pear. The three-storeyed temple at the north end of the courtyard is approached by steps flanked by stone lions. The portico is flanked by murals depicting Pear and Dorje Drakden.

The assembly hall with its dark murals depicting the Deities of the eight Transmitted Precepts (Kabgye) is adjoined by three chapels: among these, the Jordungkhang (west) contains the sacred tree stump abode of Pehar s dove emanation, flanked by two Pehar images in peaceful and wrathful guises, along with further images of Padmasambhava and Tsongkhapa; the Tsenkhang Uma (center) has a central image of Shakyamuni flanked by the pedestals of the now destroyed Eight Bodhisattvas. Formerly it also housed the throne of the Nechung Oracle backed by the Kutshab Rinpoche image of Padmasambhava through which Pehar was controlled.

Lastly, the Gon-Khang (east) is dedicated to Magzorma and has images of Nyima Zhonu and (formerly) of Pehar in the form Kundu Gyelpo. This last image was regarded as the regent of Nechung in times when no oracle was recognized.

Third Floor Here there is a single chapel with an image of Padmasambhava in the charismatic form Nangsi Zilnon, which was constructed in 1981. Formerly, the temple also housed the national treasures known as the Pehar Kordzo. 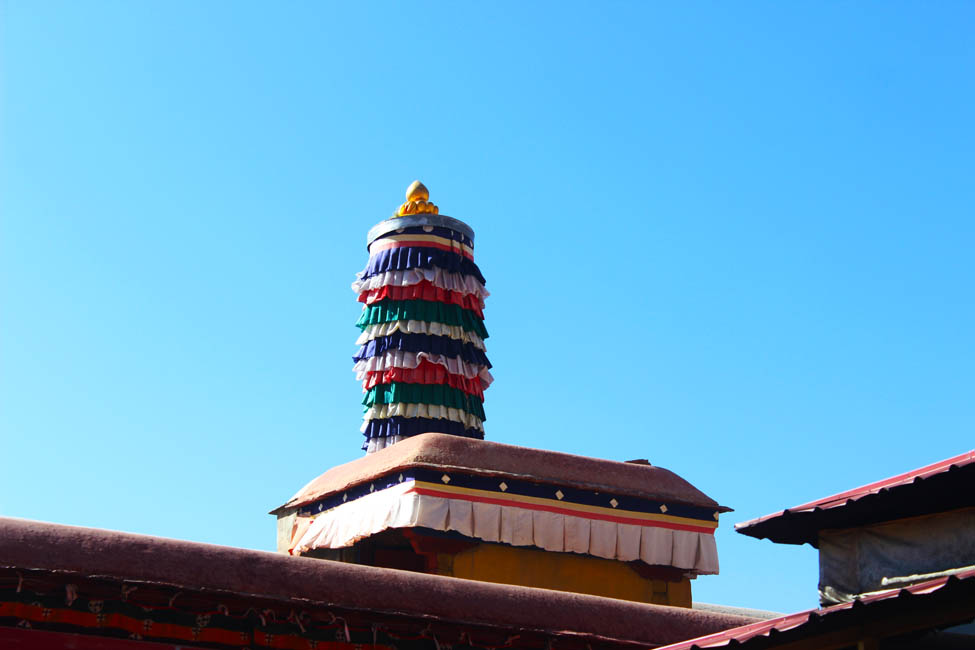