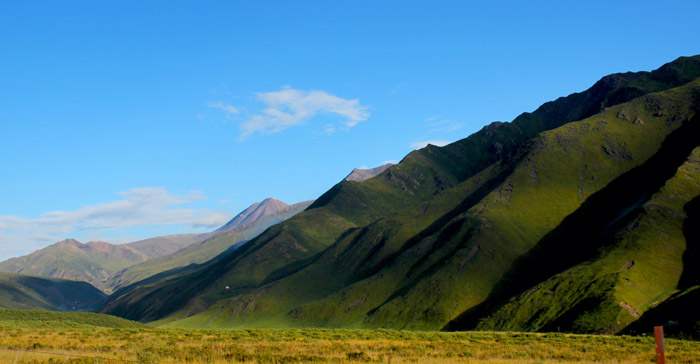 The Amnye Mache Mountain is located northwest of Machen County, Golok Tibetan Autonomous Prefecture of Qinghai Province, China. Is traditionally it is situated in Amdo, Tibet. It is the highest mountain in Qinghai Province, and the mountain range has around thirteen mountain peaks. The highest one is elevated about 6282 meters above sea level. These high mountains are covered in snow throughout the seasons.  The Amnye means a grandfather in the Amdo dialect of Tibetan, and the Machen means the large scar. 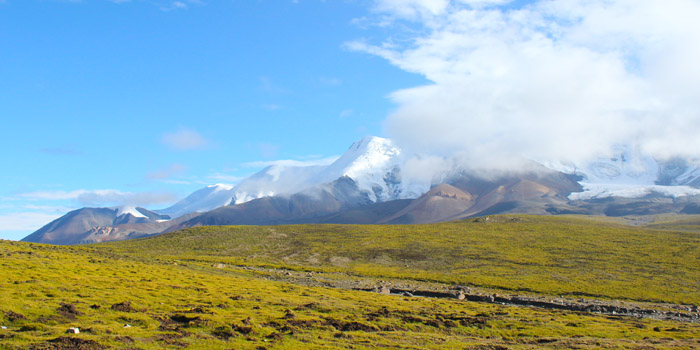 A battle ensued between the two mountain gods, in which Nyenbo Yotse slashed Amnye Machen’s forehead with his knife.  Thus, this sacred site, and the mountain god resident within it, was named Amnye Machen – ‘Amnye’ means ‘grandfather’ and is a respectful term for an elderly man.  ‘Machen’ means ‘large scar,’ so named because Amnye Machen received a large scar on his forehead at the hands of Nyenbo Yurtse’s knife. It is one of the most sacred deities in the Amdo area.

Historically, King Gesar used to pray for the deity Macha Puma by offering Sung in Tibetan, known as the burning of incense. There is a huge place displaying prayer flags all around it. Just near Dhardu Thang, there is a private vocational school known as Amnye Machen vocational School with around 200 students from different parts of Tibetan regions. Lama runs the school from the Dzogchen monastery. Not far from the school, there is Guru Monastery with few monks as most of them are tantric practitioners. The Amnye Machen mountain gate is located just near the school.

There are two ways to go for trek or pilgrimage; one is from Golok county to Tongchen Khar by car and trekking from there. The other way is from Dawu Shungma, also known as Xia Dawu in Chinese, and it is located 5km from the school. The traveler can start trekking from the school as there is a guest house at the school which costs only 20 yen per person, but there are no restaurants around the school. You can find some small shops where you can get noodles and snacks. All the Tibetan pilgrims start from the school as they offer incenses at Dhardu Thang and then start walking from there.  According to Tibetan tradition, during the horse (Tibetan horoscope) year, this is the most auspicious time to circumambulate the site. Amnye Machen’s untouched natural beauty is a sight to behold – with glaciers, gushing rivers; nomadic grassland pastures; and wild animal species found nowhere else on earth. Amnye Machen is also home to Geri monastery, an ancient, remote, and silent spiritual abode located amongst this holy site’s nomadic settlements and expansive scenery. These days, some people circumambulate around the mountain by car, which takes around five to six hours, and halfway through national highways and halfway rough roads. The best time to travel at Amnye Machen mountain, in the end, June to Mid September, as the summer season is very short in those areas. Even in summer, it is pretty cold at night. 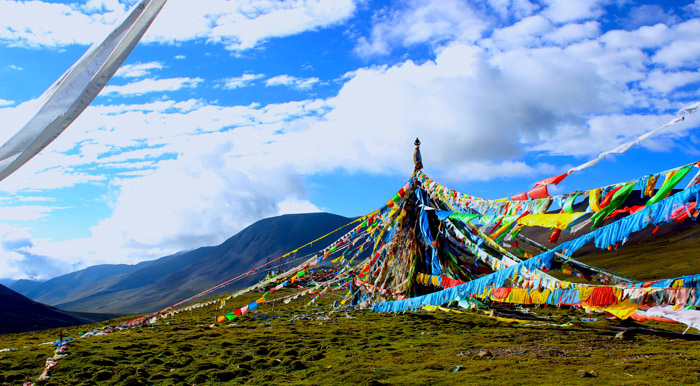 Amnye Machen is one of the most amazing sites for the traveler can visit in the Amdo area. It is one of the best places for trekking through this majestic range, but lone travelers should beware of aggressive street dogs, wild animals like wolves, bears, wildcat, and snow leopards. While trek around this majestic mountain, you will witness many beautiful wildlife animals. The traveler should also beware of altitude sickness as trekking at altitudes above 4000 meters above sea level is not a comfortable place. The highest passes are more than 5000 meters above sea level.

The air is thin and windy as a headache, dizziness, vomiting, and hallucination are common signs of altitude sickness.  The climate around the mountain is straightforward to change, and sometimes for few minutes, you can experience four seasons before the mountain glacier. The traveler should be careful about the glaciers around the mountain because these days, those glaciers became thin enough to break as two years back, few people died while walking on those glaciers. Never trek after sunset as it is when you may come across those wild animals, and it is hazardous.

The travelers should bring proper kits for the trekking as a thick jacket, and we recommend windproof jackets and pants are the best outfits there as the place is windy. We recommend nice and comfortable trekking shoes and walking stick not that necessary, but if you like to carry it is fine because everyday trek covers twenty to thirty kilometers for a week. The most important thing to carry is water which keeps out from dehydrate. If you are alone, you can ask for help for anything you need, as many nomads live around the mountain. They are very kind and helpful, and they know the place very well.